Orlical is indicated in conjunction with a mildly hypocaloric diet for the treatment of obese patients with a body mass index (BMI) greater or equal to 30 kg/m², or overweight patients (BMI ≥ 28 kg/m²) with associated risk factors. Treatment with Orlical should be discontinued after 12 weeks if patients have been unable to lose at least 5 % of the body weight as measured at the start of therapy.

Each hard capsule of Orlical contains: 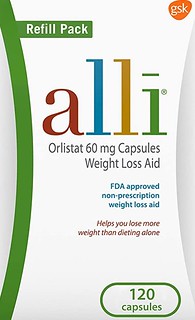